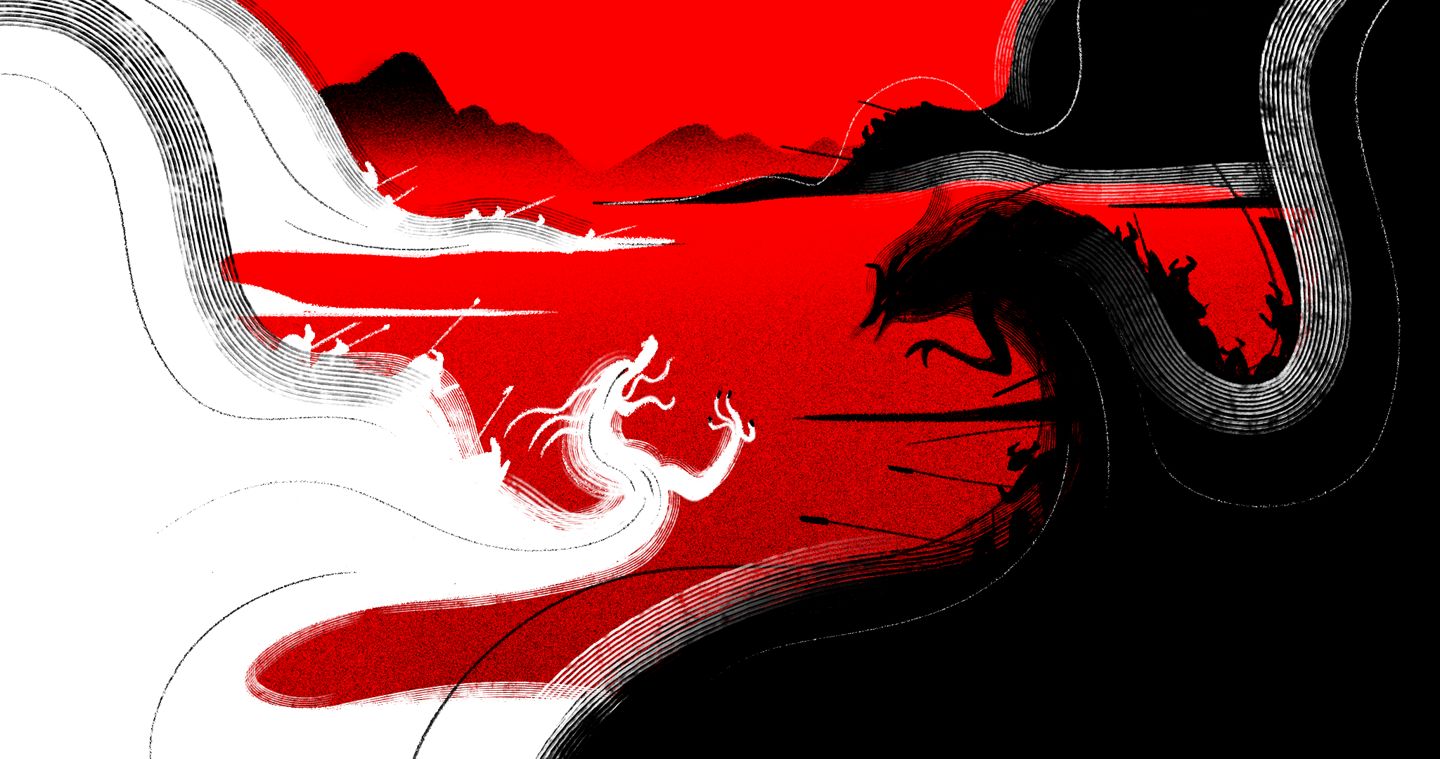 The 109-second, one shot, cel-animation Legends Live Forever, depicts seven iconic tales from ancient text The Classic of Mountains and Seas, said to be written before 221 BC, with a central message of Good Stories Never Die.

With a mission to preserve traditional culture and literature in a saturated digital environment, Yue Wen incubates literary IP’s and develops them into various digital entertainment mediums.

Tencent set out to reenforce the important role stories have in a culture’s identity, charging Final Frontier and Nerdo with finding a bold contemporary approach in portraying stories already well known to the platform’s user base, such as Pan Gu Separates Sky From Earth and Hou Yi And The Ten Suns.

Traditional Chinese art conventions and a fresh western look are fused together by the team. The stories seamlessly move from one to the next via fluid transitions, rendered with a hand drawn look, including bold silhouettes, textured brushes, and animated ink and grain.

“We love problem solving and a good puzzle. Reimagining a classic tale and its deeper message was, to put it mildly, extremely difficult, and the strong connection with their historic appearance and recognizable art added even more complexity to finding the right balance between the concept and the art style.

We studied all the myths in-depth, but then we had to unlearn them, reimagine them from scratch and focus on one single, decisive element. Then we transposed them visually into a cohesive stream of pure epic spectacle linking all the parts seamlessly.”

“When we bridge the east and west’s creative industries, we open a door to create something really special. We had so much fun putting our heads together and deep diving into the beauty and wonder of Chinese mythology with Nerdo, who are masters of their craft, and Tencent’s deeply knowledgable team of storytellers.”

The campaign has already picked up numerous awards, including Bronze for Film Craft and two shortlists at the Cresta Awards, one Silver and three Crystals for Ad Stars, and a shortlist at the London International Awards.

About the outcome, Alessandro says,

“We are really proud of this project in its entirety, a dense and action-packed one-shot movie with a highly stylized look, textured brushes and balanced and concise narration. We really like how every scene flows into the next, almost like a moving painting.”

THE SEVEN LEGENDS ARE:

In the beginning, when the universe was still formless, the giant Pangu lifted the skies from the earth.

KUA FU CHASES THE SUN
Kua Fu, the ambitious giant captured the sun after a nine-day chase. But he didn’t stand a chance against the scorching sun and perished from dehydration.

THE OLD FOOL MOVES MOUNTAINS
A stubborn old farmer chiseled away at the mountains that stood before his land. After persevering year after year, the gods took notice, were impressed, and moved the mountains for him.

THE SWALLOW FILLS THE SEAS
After a tragic death at sea, the diseased daughter of the mighty emperor incarnated into a beautiful bird who ceaselessly dropped twigs and pebbles into the sea with the goal of filling the whole ocean.

HOU YI AND THE TEN SUNS
The world was once sweltering in heat under ten suns. Sent by the emperor, Hou Yi used his bow and arrow to shoot down the 9 suns, leaving only one in the sky.

THE EMPEROR DEFEATS THE BARBARIANS
In an era of chaos and bloodshed, China’s Central Plans were overrun by warrior barbarians. The peasant emperor vowed to protect his people and defeated the enemies after incarnating as a dragon.

THE GREAT FLOOD
The emperor needed a solution to control the endless floods. Yu answered the call, re-routing rivers, building canals, and constructing dams. At last, the land was restored.